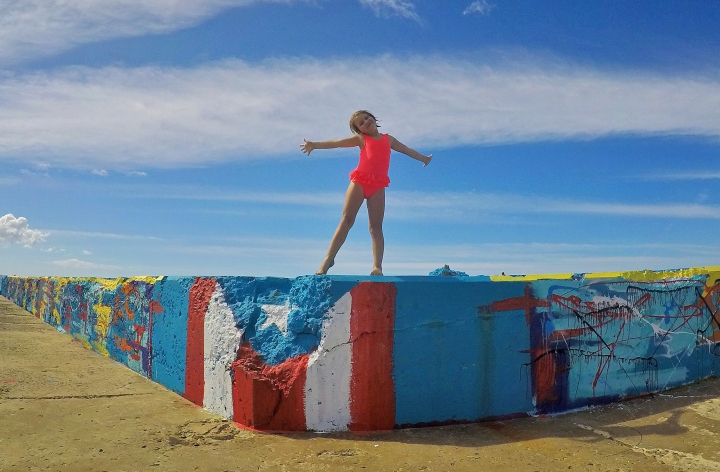 On September 20, Hurricane Maria made direct landfall on Puerto Rico resulting in the deadliest storm to ever hit the Island. As of November 20th, 500 people have lost their lives to the storm as well as leaving the island without power and water for several months (some are STILL to this day without clean water and power).

We had planned on visiting Puerto Rico for several months, and when the storm hit, we were told by our airline to cancel and that they would fly us anywhere else.

Over the past few months of planning, I had made several contacts in PR, including one family through house swapping.

I reached out to her and asked point blank “Am I crazy to bring my family to Puerto Rico?“. The last thing we wanted to do was to use valuable resources that would otherwise go to the locals, or to put my family in a situation where they were not safe.

It’s no secret that Puerto Rico is suffering from terrible press, so I needed a real answer!

We heard back almost immediately, and the answer was unanimous. Puerto Rico was recovering and that on the West coast (where we planned on staying) the Hurricane had done less damage. The West coast of the Island is also newer in terms of infrastructure. Their power grids and water supply were able to be fixed sooner than the rest of the island.

That week PR’s tourism department started rolling out a Meaningful Travel (voluntourism) campaign and declared that Puerto Rico was “open for business”. We also received a message from a contact in Rincon saying similar things, so ahead we went.

We had no idea what to expect, but we had fallen in love with Puerto Rico a long time ago, and had to go see it for ourselves.

It wasn’t until a few days after we arrived that we started to form our own opinion on the state of the island.

There is no question that Puerto Rico is struggling. On the eve of filing for bankruptcy, because of a massive $70 billion dollar debt, Hurricane Maria came through causing another estimated $95 billion in damages to Puerto Rico (according to Governor Rossello).

What we did see, however, was an island that was rapidly healing. We spoke to some first responders from Florida who had been there since day 2, and they were sure that there would be no way that Puerto Rico could recover. There wasn’t a single green leaf left on the trees.

By the time we had arrived, green was everywhere, it was a beautiful thing to see!

🌟🌟 So how is Puerto Rico following Hurricane Maria?

El Yunque National Park, arguably one of the top reasons to visit PR, has seen damage that will restrict it from being open for possibly the next 100 years. Devastating damage.

Culebra and Vieques, also two huge reasons to visit the Island, are also struggling and will not be able to host visitors for what is likely, the better part of a year.

The bioluminescence bays (Puerto Rico has 3 including the brightest on Earth) were severely damaged but are finally coming back to life.

Most of the Eastern side of the Island are STILL without clean water and power. The government has been hesitant to put any money into repairing the infrastructure when it desperately needs to be replaced. This is leaving a good 20% of the locals without a fridge to house such necessities as food and clean water for drinking.

These are American citizens, this (in my opinion) is unacceptable.

DONATE Funds: Operation Agua is bringing water purification systems to the people in need and an organization that I personally can get behind and put my money.

Donate Time: Visiting Puerto Rico? Get involved with See Puerto Rico’s Meaningful Travel. They usually have events every weekend and are a great way to help.

🌟🌟 The Good News! Puerto Ricans are a very proud bunch of people. They LOVE their country, and they are thrilled to share it with you. Everyone we met was so welcoming, kind and always asked “Do you love it here? Will you come back!?”

I can honestly say, I have never felt more at home somewhere while traveling abroad. It was truly like being welcomed into a family. Despite everything that the Puerto Ricans had to endure, there is no getting their spirits down!

Old San Juan is just as stunning as ever! The colourful buildings, blue cobblestone roads, the restaurants and the fabulous El Morro as well as San Cristobal forts are all reason enough to visit. Old San Juan is steeped in history and considered by many to be the oldest city in the Western Hemisphere.

The Island is starting to thrive again. Vegetation is popping up all over and cleanup is well underway in most places.

Crashboat Beach has forever been changed by Hurricane Maria and is no longer the beach you would recognize, but that still doesn’t change that it is THE place to hang out and one of the nicest beaches on the Island. We loved it so much we spent 3 full days here!

Puerto Rico is desperate to increase their tourism, and if you are considering visiting, please do so! I promise you that you will not regret it for a second!

Even without some of Puerto Rico’s most famous sights, you will still have numerous options for activities and beaches.

Flights are super cheap right now, Americans do not need passports to visit, and you will be blown away by the Island of Enchantment. 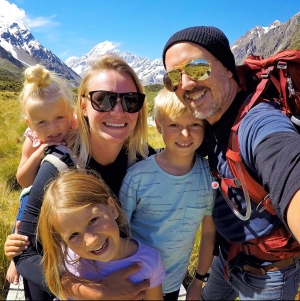 We are the 5 Globetrotters, we’ve got big dreams but small pockets. Want to travel more and work less too?

A kids trip to Vegas?! 🤔 😬😂 While Vegas may not be the most family friendly city, there are several FREE things that will keep you and your kiddos happy. Here’s what we did - and we didn’t spend a penny 🙌⠀ ::⠀ 🚶‍♀️walk the Strip! We spent most of the day checking out all the lights and buildings. Everything is so grand! (Parking is also free at most casinos). ⠀ ::⠀ 🎪 Circus Circus has professional shows every hour or so for free and they are fantastic! ⠀ ::⠀ 🧜‍♀️ The Silverton has mermaids swim in their giant aquarium. We even saw Santa go for a swim 😂⠀ ::⠀ ⛲️ Don’t miss the fountain show at the Bellagio, but also go inside to their atrium. They deck it out for the season and it’s gorgeous 😍⠀ ::⠀ 🌋 The Mirage has a massive volcano outside their doors that erupts each evening⠀ ::⠀ 🏟 The Venetian has a mock Venice complete with canals that is gorgeous. We even caught a live (free) opera performance. ⠀ ::⠀ Vegas is altogether a fantastic spot to get your fill of the city life. It was a first for all of us, and we were amazed! ⠀ ::⠀ Have you been to Vegas? Did you bring your kids or fly solo?⠀ ::⠀ #lasvegas #vegas #vivalasvegas #kidsinvegas #familytrip #free #freethingstodo #nevada #lasvegasstrip #lasvegasblvd #lasvegasnevada
Home Sweet Home 🏠 after 4 long weeks apart, we reunited with our tiny house on wheels and got back to doing what we love most 🥰 . #boondocking #drycamping #tinyhouse #rvlife #fulltimerv #kidsoutside #liveoutside #ontheroad #ontheroadagain #adventure #theadventurecontinues #nevada
“Our house is on fire” 🔥 It’s been devastating to see the destruction in Australia, I just can’t quite wrap my head around it. 🌍 We simply cannot afford to keep ignoring what science has been telling us for years. We are in the midst of the greatest extinction of all time; with us included. 🌍 But look friends, not all is lost. We have what it takes to stop this, but we cannot do it without drastic activism. We cannot stop this horror without huge political steps and that will not happen without US (yes, YOU too) speaking up and demanding change. 🌍 Today in Australia thousands of climate activists are taking to the streets in protest. Yes, there could be a “better day” for these protests, but let’s be clear here - we want change TODAY. We simply cannot wait for a better day. 🌍 And for everyone else around the world, let’s make 2020 the year where we all make our voices heard. We need you desperately to champion for our future. All of us. 🌍 This planet of ours is the one thing we all have in common. Let’s make 2020 a year of change. 🌍 #onevoice #oneplanet #noplanetb #activismworks #fridaysforfuture #australia #australiafires #climatechange #climatechangeisreal #newyearsresolution
YES those colours are real 😍😍 those beautiful colours (pink and turquoise!) are created from the metals in the soil, however missing is the colour Blue. Apparently some days you can see that too! Put this drive on your list if you visit #deathvalley , and don’t forget to swing by the Mesquite San Dunes. So much fun!! #deathvalley #artistsdrive #sanddunes #mesquitesanddunes #deathvalleynationalpark
A lot of you said you had never been to Death Valley National Park - and to be honest, I wasn’t expecting much either. It certainly is a lesser known park isn’t it? BUT like all the national parks in America - they are absolutely fantastic and worth the visit. I posted some pretty interesting facts about the park in my last post (so go read them!) and today I wanted to share some more. 👉 Here at Badwater Basin you are 285 feet BELOW sea level (7th lowest in the world). These unique honeycomb shapes are the result of salt deposits. It had rained the night before (shocking I know!!) and it created these stunning water deposits. Typically it’s just straight up salt, so I think we lucked out seeing this! It made for a Super messy walk, but it was absolutely breathtaking! 👉 It gets so hot here during the summer that it’s hard to breathe because of the high levels of salinity, so be sure to visit either in the morning - or like we did - at sunset. It was one of the highlights of our trip!! Just don’t taste the salt 😂🤦‍♀️🥴 :: #sillykids #deathvalley #deathvalleynationalpark #badwaterbasin #familytravel #rvlife #rvtrip #nationalparks #california #findyourpark
Current Vibes 🥰👆 We wrapped our tour of #California with one last National Park - Death Valley! :: Here are some fun facts for you 👉 It’s the largest national park in the lower 48 and the original mining place for Borax (thank you slime for putting that back on the map!) It recorded the hottest temperature in the world (134 degrees!! 🥵) and is the driest place in the country. In 1932 it didn’t see a single drop of rain! ☔️ :: Have you visited this otherworldly place?? #deathvalley #deathvalleynationalpark #nationalparks #nationalparkstour #findyourpark

Where are we now?